Ever wonder how Hemingway managed to travel the world, fight in Spain, retire to Cuba, etc.?

Ever wonder how Castro managed to live so long?

Ever wonder how Churchill and Roosevelt managed to win World War II?

Ever wonder, what happened to all the tough, strong, sassy individuals who made history?

Here’s one of my favorites: 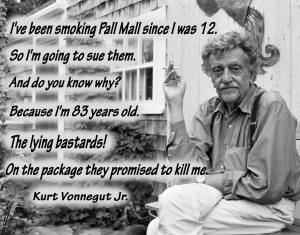 I desired to smoke a cigar the other evening—in the manner of my preference, that is, accompanied by liquor and conversation in a beautiful setting. In Los Angeles, this activity is becoming more difficult to achieve all the time. Of course, being that Southern California is the birthplace of the modern Eugenics movement (which inspired Hitler), it shouldn’t surprise me. Hitler hated smoking and smokers.

Smoking was depicted in posters as the vice of “capitalists, Jews, Africans, degenerate intellectuals, and loose women.”Hitler in fact called tobacco”the wrath of Red Man against the White Man for having been given hard liquor.” Smoking was considered “a genetic poison to the Aryan Race.”

I had received a gift of a rare and expensive cigar of a quality I had never before experienced. I wanted to do this cigar justice. Therefore, I decided to go to a lovely outdoor venue in Alamitos Bay, by the Marina, in Long Beach, California. The restaurant has a lovely round fire pit which had effectively become the smoking section for all those smokers who do not wish to offend the other diners in this breezy outdoor establishment. It is a large circular stone structure such that smokers can actually face each other and have a conversation! I headed out there on a perfect Southern California Sunday late afternoon in June.

I knew something was wrong when I saw that the fire pit had been taken over by diners and not an ashtray in sight. The other thing I noticed was that the patronage on a popular sailing day consisted solely of blondes of the female persuasion. I could characterize the majority of these patrons as “ladies who lunch.” If any of them had hoped to encounter a gentleman to converse with they would have been disappointed. Not a smoker or sailor in sight.

I was about ready to leave Alamitos Bay in order to try my “plan B,” when I heard live blues music emanating from a nearby establishment. It seemed to me that blues music could be associated with “decadent” behavior of all sorts to include smoking, so I thought I would investigate.

As I approached the establishment, I noticed an alley way which was obviously part of the sophisticated Southern California architectural design. In this alley was a bench, and a slight man in his fifties was seen hunched over, hurriedly puffing a cigarette.

I approached him, “Is this the smoking section?” I asked with what I hoped was a cheerful—not condemnatory—tone.

“As far as I’m concerned it is,” he answered with a slight air of defiance.

“I am looking for a place,” I began, “where I can smoke and drink…”

He joined me so that we chanted in unison, “…at the same time.”

I told him about the fire pit, and he was familiar with the venue.

“The police are cracking down on all smoking here,” He said.

He proceeded to recommend a “dive bar” near the docks, where the stevedores and longshoremen drank. Sounded a little rough for me, a woman in my fifties.

I decided to go with my “plan B,” which was a downtown Long Beach establishment frequented by young professionals which, uncharacteristically for that demographic, permitted smoking on its patio.

I was relieved and gratified to see ashtrays placed strategically throughout the patio. A lava-rock style heater was burning brightly in the center of the patio, to counteract the marine breezes which had just picked up as is characteristic of the sunset hour in Long Beach. Since I was to smoke a cigar, an activity which often offends even cigarette-smoking ladies, I checked the direction of the prevailing breeze and situated myself well downwind on the patio. Whereas conversation was going to be extremely unlikely as the crowd had not yet arrived, I amused myself people-watching down the Promenade.

I ordered a vodka martini with olives. It arrived—passable but not extraordinary.

I proceeded to unwrap my cigar—a Chateau de la Fuente Opus X, 1992. I snipped it, toasted it, and lit it with a torch lighter. Yes, indeed, it had almost a nutty taste with perhaps a hint of coffee-like overtones. A truly fine cigar—the finest I had ever experienced.

Meanwhile, I observed a gentleman in his sixties, dragging two large Pullman-style suitcases down the Promenade, each with a small suitcase on top. He stopped, turned around, and there I saw that a woman in her sixties was following him, of average height and with a dignified gait, and therefore probably perfectly capable of rolling her own suitcases. ‘Chivalry is not dead,’ I thought.

Then I started seeing young women, dressed to the nines, each being deferentially trailed by a man whose entire body language and demeanor indicated subservience.

Just then two Mexican busboys joined me on the patio to take a cigarette break. They chose the upwind section.

A party of three young couples arrived, the ladies in the lead. There was a brief discussion as the ladies apparently elected the indoor bar rather than the patio. One of the three gentlemen paused briefly to take a last drag on his cigarette—the only one of the six to do so—before snuffing it in an ashtray in order to join his friends inside. He hadn’t appeared to put up the least bit of argument in opposition to the decision of the ladies.

More young couples arrived, each exhibiting a similar dynamic—the ladies were “in charge”. Gentlemen who were smoking, snuffed their cigarettes, dutifully, before going indoors so that the ladies’ studiously “casual” coiffures would not be disturbed by the gentle breezes. Not a single female was smoking except for yours truly.

Gentlemen who were walking alone—without dates—did so in subdued fashion—or were vigorously exercising. The only men who had male companions appeared to be waiters or busboys. No man of leisure apparently sought conversational companionship on this fine evening in this sector.

I’m sure that it is merely a matter of time before this establishment no longer permits smoking on its patio in deference to “health authorities.” Meanwhile, it is a lovely setting. I set the last of my cigar in the ashtray and waited for it to extinguish itself before settling the bill indoors.

I think I’ll try conversing with the stevedores and longshoremen next time.